A Day at "The Park" with ExtendSim 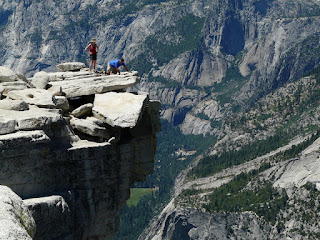 “Why are you collecting this data?”, I asked. It seemed a reasonable question given my current location. You see my friends and I were hiking to the top of Half Dome in Yosemite National Park, and we were currently about 7 miles from the trailhead. Imagine our surprise when a formally dressed college student (complete with official ID badge) asked us if we were willing to participate in a trail study. We were supposed to be in the middle of nowhere! But there she was sitting off to the side of the trail at a foldout card table that was holding a stack of time cards, a clipboard and some stickers.

“We’re trying to understand the traffic patterns along this route to Half Dome.”, she answered. "Participants show their time cards to officials stationed at various waypoints along the way. The officials will mark your time of arrival at each waypoint. Would you like to participate?”

“Perhaps.”, I said. “This sounds like you’re collecting data for a simulation study. Is that true?”

“What simulation tool are you using?”, I asked.

I smiled and said, “Well, in that case we’d be very happy to participate in your study.” ;-)

So the next time someone asks you, “Where is ExtendSim used?”, maybe the most appropriate response is, “Where is it not used?”
By Anthony Nastasi - March 09, 2012 1 comment: