When watching live television, we don’t think twice about how the images we see on the screen are manipulated and morphed together. In the early days, live television shows would simply cut from one video to the next. So you would see a newscaster report on a story, then the screen would cut to a video of that story.

In 1974, prior to fulfilling his dream of creating a simulation application that would allow individuals in any discipline to use simulation, ExtendSim architect Bob Diamond and colleague Steve Rutt invented the Video Repositioner - a device to reposition broadcast quality video in real time. 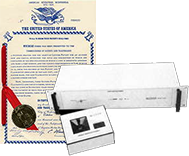 With this Video Repositioner, television and film apparatus could finally alter the position of a video image without rescanning the originally generated image. So a newscaster could report on a story and you could see the video running in real time within the same screen.


This Video Repositioner was the impetus to the creation of image processing devices such as the Quantel DPE-5000 (motion adaptive line interpolation allowing both field and frame information to be used according to picture content), Grass Valley Kaleidoscope (for digital effects such as wipes, keys, recursive effects, mosaics, etc.), and Ampex ADO (digital special effects which allow rotation and perspective of video images) used by television stations and production companies including the CBS Television Network and EUE/Screen Gems.

40 years later, this groundbreaking invention will be recognized at the 65th annual Technology & Engineering Emmy® Awards - honoring development and innovation in broadcast technology and breakthroughs that have a significant effect on television engineering. The National Academy of Television Arts & Sciences (NATAS) awards Emmys to those involved in engineering technologies which either represent so extensive an improvement on existing methods or are so innovative in nature that they materially have affected the transmission, recording, or reception of television.

The 65th Annual Technology & Engineering Emmy awards will be presented on January 9, 2014 in Las Vegas, NV as part of the International Consumer Electronics Show. Imagine That Inc. President Bob Diamond is honored to be recognized by the NATAS for his Pioneering Analog Video Repositioner.

For more information on the Technology & Engineering Emmy Awards, please go to http://emmyonline.com/tech_65th_recipients.
By Kathi Hansen - December 24, 2013 No comments: