For the past several years I have been wanting to learn Python as it has been growing in popularity. Recently I decided to take a few courses at my local university and they required a familiarity of Python.  So, I finally began to learn Python and I want to share my experience because Python can be a valuable tool for every simulation modeler.

There is an extensive amount of free online training content for Python. You will have no trouble finding material to fit your needs.  My biggest confusion starting out was regarding the coding environment.  There are many coding environment options for Python, and I am hoping this information will save you a bit of time and confusion. I am listing three typical environments below. There are many others, but I think most of the others are like one of the three listed below.

I would recommend every simulation modeler should consider learning and using Python for data analysis and charting tasks. I found Anaconda to be the easiest environment to get Jupyter Notebook running with the appropriate modules needed. If you are a fan of Google, Google Colab had the same “notebook” feel as Jupyter Notebook and it didn’t require any installation.

Below is an example of a plot set up in Jupyter Notebook. It takes very little code.  The first block of code is importing the required Python modules.  The Pandas module is used when importing data from Excel into a dataframe. The Seaborn and Matplotlib modules are used for the plotting functions. The second block of code is reading the Excel file and putting the simulation data into the Pandas dataframe. The third block of code is setting up the plot. The dots on the plot are the actual simulation results where one dot represents one simulation run. The line is a fitted curve that is automatically shown on the graph. 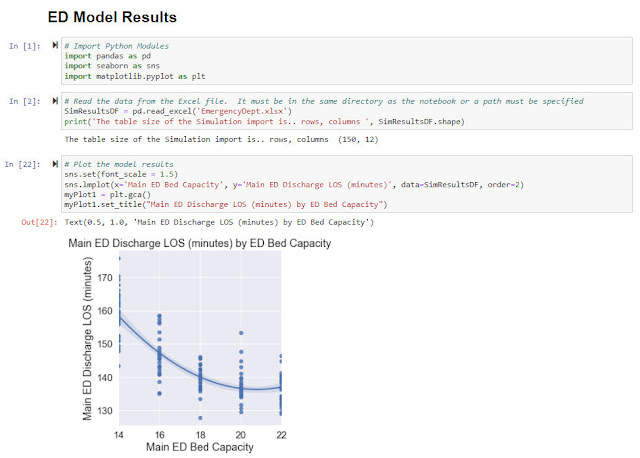 I used to do this task in Excel by using pivot tables and pivot charts. However, each time I reran the model and created a new data set of results, I would have to recreate the pivot table and pivot charts. The beauty of using a Python script like the example shown here is that is that this code can simply be rerun when new simulation results become available. This is much easier than using the pivot tables.

From this example, you can also see the power of combining the capability of the Scenario Manager to run experiments with the charting capability of Python. Coupling these two tools is an outstanding combination.

Did you know you can run models simultaneously in ExtendSim?  Yes, you certainly can.  That feature has been in ExtendSim since v10 was released, but I often run into ExtendSim users who are not aware of the feature.  It is one that I make use of all the time.

To run multiple models simultaneously, all one needs to do is toggle the run mode button to show multiple people running – you can see this in the red circle in the image.  Do this for each of your models. Then click on the run button for each model.  That is all you need to do! 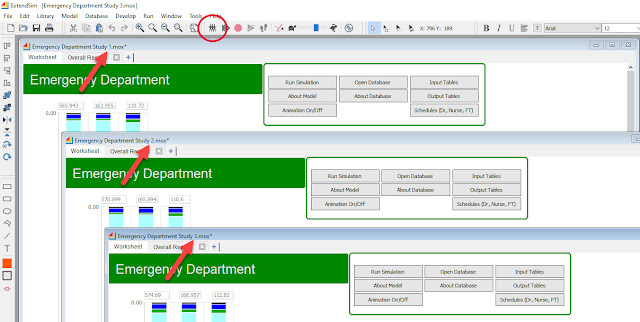 How many models could you run simultaneously?  My computer has 4 cores / 8 threads and I tend to run around 5 models simultaneously.  The ExtendSim interface and other Windows applications that run in the background also needs some CPU capacity.

One last thing to mention.  If your models imports or exports data from Excel, be aware that Excel doesn’t like multiple models accessing the same file simultaneously. So, you might need to turn the import and export off or set the model up with different spreadsheets.

Try it for yourself sometime if you have not already.  This is an awesome feature.

Is it possible to build an agent-based simulation (ABS) model in ExtendSim? Certainly. We recently helped build a model of the intensive care unit (ICU) of a hospital. The purpose of the model was to study the impact of facility design. We used ExtendSim to compare two facility designs by looking at how nurses interact with each other when requesting patient care assistance. The model turned out to a good example of an ABS model, and it was straightforward to build in ExtendSim.

Typical discrete event simulation (DES) models are process-based where entities flow through a defined set process. ABS models are a special case of DES models. ABS models use autonomous decision-making entities called agents where the agents make decisions based on a set of rules. In typical ABS models, the focus is on the agent behaviors.

The ICU model turned out to be a state diagram similar to the one shown below (please note that I have simplified the state diagram for illustrative purposes). The nurses are modeled as agents in the system. The nurse behavior is modeled using their states and the rules around why the nurse agents transition from one state to another. 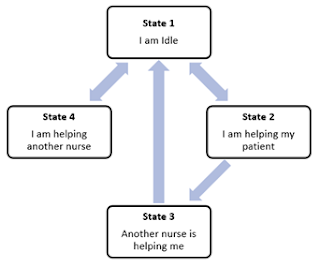 This example is simple to build in ExtendSim once you understand the modeling components involved. This includes the ExtendSim database, a few advanced database features of which the link alert is the most important, and the Queue Equation block (all of these topics are covered in the Advanced ExtendSim course by the way).  What we discovered from this experience is that ExtendSim is a great tool to solve certain kinds of ABS models.